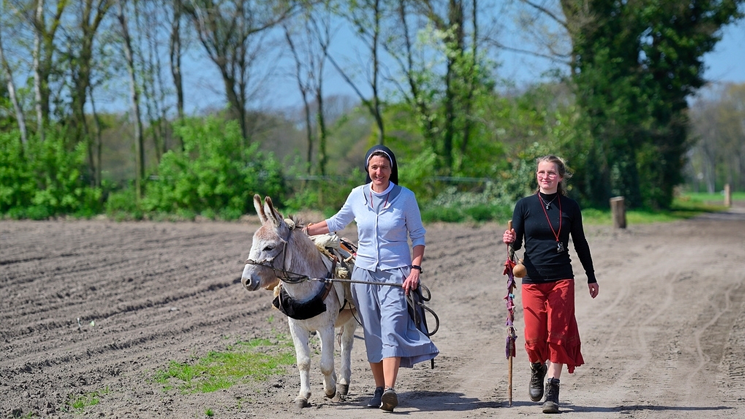 During the second episode of 'Op het Kloosterpad' I was inspired by Ricky Rieter (83 years old, diehard pilgrim). Wonderful to see how Ricky lives and walks through all kinds of weather, because after all, all the weather is pilgrim weather! I also completely agree with her next statement:

"There is something in me that drives me to walk. I find that when you are outside and on the road, you automatically come into contact with deeper things in yourself. You let things go and you can leave things behind. Not like that it can no longer be there. Everything can be there from me, everything. The whole life, including your mistakes, "says Ricky Rieter.

But not only Ricky has conquered a place in my heart, I have also given Ludwig Volbeda (30 years, illustrator) a nice place. How wonderful to see how someone can bite into the monastic history through a mappa mundi (medieval map). This also provided him with many insights for monastic life, including the following:

"Before I started this, I had the feeling that you would go into a monastery if you knew something for sure. And the longer I was working on this and the more I read diaries of monastics it became clearer to me that people They also go into the monastery because they are really looking for something, so it's not a period behind a sentence, but a question mark behind a sentence you want to learn more about," says Ludwig.

Because of these words, it may just be that my uncle was looking for an answer and therefore decided to join the Jesuits and left for Syria. I suspect that he found his answer there. He had a lot of love for himself. This is already apparent from the fact that he chose for himself by studying a lot and ultimately did not give in to a marriage or a life in the Netherlands. Because of this self-love he was able to love a lot of people. He did this by accepting every person for who she was, offering a listening ear and taking care of them when needed. I think his Zen retreats and hikes he organized also contributed to this, because according to my uncle a good walk leads to reflection and it broadens your mind. The answer he sought lay in his "inner house," as he called it. Where all the answers can be found, according to him. And I completely agree with that, because if we find our inner strength and really listen to it, then in my eyes you have found the pure love of life.