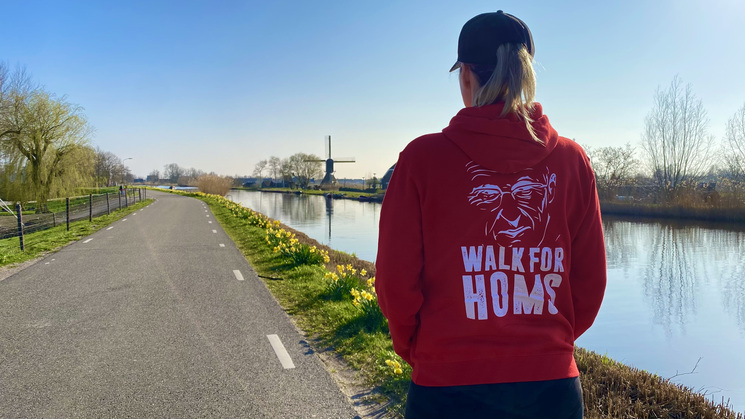 Amsterdam, April 5, 2021 - The youngest niece of Father Frans van der Lugt sj is organizing a pilgrimage from Amsterdam to 's-Hertogenbosch from April 5 to April 10, 2022 in memory of her uncle and for the reconstruction in Syria.

Father Frans van der Lugt sj (1938-2014)
Father Frans van der Lugt sj was a Jesuit and gave his life for the people of Syria. Before the war, Frans organized hikes, as he called them. These were long walks in which thousands of Christian and Muslim youths joined, because Frans was welcome to all. There was dancing, singing, talking and meditating along the way. Frans was one of the few people still living in the besieged Syrian city of Homs, where he offered help to the people for whom it was not possible to flee. On April 7, 2014, he was murdered in the garden of his monastery, where he is also buried.

“A long walk leads to reflection and it broadens your mind,” says Frans van der Lugt.

Much has been destroyed by the situation in Syria. With Walk for Homs, Anne Claire van der Lugt wants to help the inhabitants of Syria to rebuild their country. She does not do this alone. She is joining forces with the Jesuits, the Jesuit Refugee Service (JRS), ZOA and the people who still live in Syria. Only financial support is needed.

Walking and commemorating together (2022)
Walk for Homs consists of five different walking tours. The pilgrimage, a journey of six days and 145 kilometers. It is also possible to participate in the first and last stage. In addition, there is also the option to walk your own pilgrimage to 's-Hertogenbosch or other private walks. For those who are not allowed to walk, it is possible, just like the walkers, to attend a special mass in the Obrechtkerk in Amsterdam and / or in the St. In this way it is possible for everyone to contribute to the reconstruction of Syria.

"Father van der Lugt has done a great job in Homs, for both Christians and Muslims. The Walk for Homs wants to give people a helping hand in this ravaged city." Gerard de Korte, Bishop of the Diocese of 's-Hertogenbosch

Projects
Walk for Homs supports the reconstruction of Frans van der Lugt's Al Ard ("The Estate") and the realization of the Frans van der Lugt Center in Homs. In addition, young people in the Damascus region will receive quality education, so that they too can build a future.

"The life of Father Frans van der Lugt sj was devoted to bringing people together, establishing solidarity and being there for the weakest in society. Where hatred grew, faith and love in him became stronger. That's why I wear Walk of Homs. a warm heart. " Johannes W.M. Hendriks, Bishop of the Diocese of Haarlem-Amsterdam

Sign up and sponsor money
For more information and registration, please visit the website www.walkforhoms.nl. When the registration is complete, an action page is automatically created. In this way, everyone can help raise donations for the projects Walk for Homs supports.