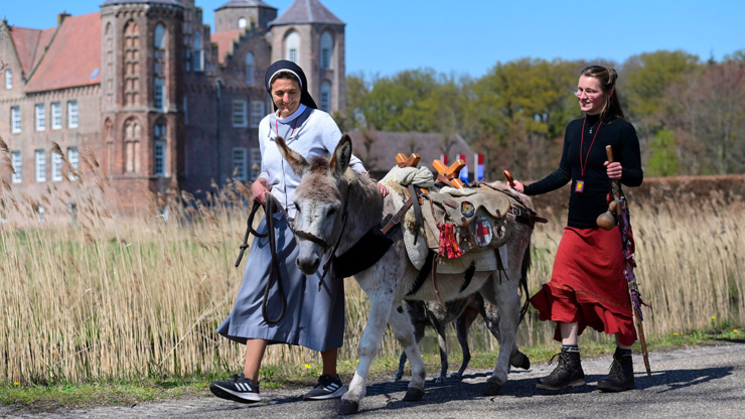 At the beginning of April, Nita, a participant of the pilgrimage, drew my attention to the Kloosterpad that would be opened on April 30th. The Kloosterpad is a walking path of 330 kilometers divided over 15 stages along some fifty (former) monasteries and abbeys in central and eastern Brabant. I am convinced that things will come your way when you are ready. The fact in this case that my uncle lived in a monastery in Syria himself and that this path was opened just after starting Walk for Homs. It cannot be otherwise that this path is intended to be included in the preparations for my pilgrimage. I am convinced that this path will contribute to my search for my uncle and to passing on his ideas to our younger generation. That is why this path will also play a role during the preparations for Walk for Homs. But more about that later, because I first want to look back at the episodes that KRO-NCRV made for Kruispunt 'Op het Kloosterpad'.

The KRO-NCRV has portrayed het Kloosterpad (the monastery path) in two episodes of the television program Kruispunt. In this program different people are portrayed with a special story. In the first episode they set out with Carla Bleijs and Mirjam Latjes, Babs Jaspers, Sister Marga Dominicanes van Neerbosch and brother and sister Mia and Frans Teunissen. All of these people have something that inspires me. But three in particular.

Carla Bleijs
When Carla's youngest son, Luke, dies suddenly, she wishes at that moment she only had light and air. She could leave at that moment and because Luke was a real Italy fan, she decided to take the plane and walk 'together' with him for a month through Tuscany to Rome. An intense experience where she never felt alone for a moment, because Luke was with her. They sang, laughed and cried 'together' and she loved that. She continued to walk. That Carla experienced Luke's presence during her walk I believe only too gladly, because I also feel my uncle regularly looking over my shoulder and sometimes giving me that little push in the right direction or just being there for a while. Which is what Babs and the visitors of the Trinity in Velp might also experience.

Babs Jaspers
Babs lives in the Trinity in Velp and that this place is a place where you immediately feel that it is special.

"It's a place when you come here, you feel it's special here. I sometimes forget that. And then walkers come by and they talk to me and then they start asking questions. And they always end with: This is a very special place and you just feel that something has happened here in those years."

In my search for my uncle, I discovered that churches built before and during 1400 are often located on energy sites. These places are called ley lines and if I understand correctly, they are often connected to each other. Nomads used to travel the earth to meet each other. They were guided by the stars in which finding water was of great importance. Where they found water, there was often a tree for shade and rest. Just like people, a tree also drinks water, so there was a water source here. Over the years, the nomads have settled around these wells and often built a church on the well to gather there to share stories and knowledge and to exchange thoughts. These meetings also released a lot of energy between the people, heaven and earth. So in my view it makes sense that we feel that there is something special in these places. Perhaps the pyramids and Mayan temples were also built that way via these sources (stars, water and energy). Who knows.

Mia Teunissen
Walks the Kloosterpad with her younger brother Frans and sought her own path in life. After spending her childhood with the nuns in the monastery, she joined the Bhagwan in the 1980s.

"I had heard about the Bhagwan before and I thought when my kids are grown up I'll look there. Because there was something I thought I should check out what that is. It was a wonderful time."

She can't see if she has stepped out of the movement.

"Ultimately not. You never got out of the movement, because what is that movement? They say it's a cult, but everything is a cult when you come together. In my heart I'm still a Sani Wasa, but I'm also faithful and that is not a contradiction."

What I like about Mia is that she went in search of who she is and that she embraces everything that comes her way. In the monastery, at boarding school and with the Bhagwan she experienced the same feeling 'without worries' and in your 'little house' you do have worries again. I think Mia has found her "inner home" as my uncle called it. Hopefully Mia will inspire you, like me, to follow your own path and be open to people from other movements or wherever. For who now has the real truth of life in his hands? Nobody if you ask me, so let's get inspired by the people who cross our path.